A Temple for Tomorrows 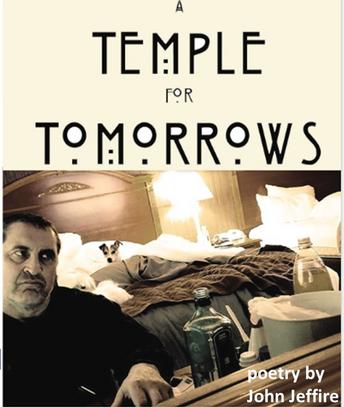 “John Jeffire is Detroit’s Hero Poet. He writes gritty, feisty poems from his urban experience of being a stranger in a strange land. Jeffire’s poems make you feel, think, question and rebel against a callus world that offers little to the working people in America. John is a writer who was a wrestler, a coach, a high school teacher, and one the most unique and distinct voices on Detroit's literary scene.  In A Temple for Tomorrows, readers will find poems that reach up, grab you by the soul and force you to look closer at the rawness of life in the 21st Century. This is John Jeffire’s finest collection. Savor it, treasure it and learn from it.”

​“Hustler. Rough beast. Teacher. Right out of the gate John Jeffire’s book shrieks. This puzzle is an homage of blood, family, war—shake downs, masques of shame, rotary phones, doing time. Its pieces are innumerable—chaos, surrender, soul, both penniless and proud; they are abandoned motels, saving face, steel and bone. They whisper Johnny Ace and a Wonder Woman. Detroit, America—eat your heart out. A Temple for Tomorrows kicks ass, takes names. At its core is an inimitable heart.”

“John Jeffire is a bard of basements and bars, of auto plants and alleys, of motels and mass gravesites, his hard-won cred gleaned from the grit-lined streets of Detroit, which figures prominently both as setting and character that are by turns menacing and nostalgic. These poems are visceral, punching through skin and bone, apathy and cynicism to enter and tap our deepest wells of knowledge and recognition. Jeffire’s writing is vivid and brutal, even primal, yet he often pierces his prevailing blue-collar doom with thoughtful allusions to myths, history and politics. Here Jeffire delivers poetry that is at once seething and despairing, confident and controlled, adding inventive complexity that mirrors these modern times and underscores one of the book’s major themes: nothing is as simple as it seems. These poems will leave you dazed, staggering, breathless.”

“John Jeffire writes with a scalpel, scoring and scarring with words precise and pointed. He ranges widely on these pages: absorbing the spoken bullets of a warrior son; conjuring funerals in Savaa and, at home, a father’s savage fist; haunting hospital elevators and hunting Suzi Quatro; probing Gene Rayburn’s spell upon his mother and Jefferson’s hollow declarations to Sally. Redolent and resonant, Jeffire reminds of Philip Levine and Jim Daniels when he writes of Detroit, Walter Reuther to Johnny Ace. This collection showcases a bright talent whose work echoes and lingers beyond the second reading.”

–Tom Stanton, author of The Final Season and Terror in the City of Champions

“A Temple for Tomorrows is easily Jeffire’s most important work.  It is the gritty, steely and raw soul of a rooted Detroit native.  From his opening poem Birth Certificate where he literally bursts into the world with all the rage of a Joe Louis fist, to his closing poem Wonder Woman where he loves and grieves resolutely like only a Motor City man can – Jeffire creates a roaring opus of words.  This work moves like only a Detroit tale can.  It’s richly filled with stories of the complicated relationships we have with ourselves, family, lovers, and sprinkled with politics and revolutionary musings.  A Temple for Tomorrows is just as emotionally opened as it is guarded – which is the highlight of its flawless brilliance.  I found myself standing Penobscot straight with pride to be exposed to this masterpiece and to call its maestro my brother and friend.

—La Shaun phoenix Moore, author of The Absence of Smoke and Mirrors


“The authenticity of John Jeffire’s voice is awe-inspiring—a smart, made in Detroit voice that knows the streets, what they offer and what they take away.  He writes, “When my bones were made of bone / I stood Penobscot straight / and made my declarations / to priest and beat cop with equal parts / kiss my ass and reverence.” Jeffire looks you in the eye as he confronts issues from war and injustice to living with the fear of his ailing wife’s death. Grab a Kleenex before reading his beautifully crafted love poems. From “Saudade II”: “I started wearing your perfume / last week after I ran out of aftershave, / you know, your bottle/ with the fancy flower shaped glass lid, and then / I began wearing your pajamas.” A Temple of Tomorrows is an important collection, grounded in today’s realities. Beneath Jeffire’s bare-fisted grit you’ll find a rhythmic pulse, not just his own, but one that beats for city and country. You trust this voice and feel at once vulnerable and protected.”

“John Jeffire’s polished verse in A Temple for Tomorrows sings a razor-edged lullaby without melancholy or sentimentality for raw-knuckled survivors.  Written with clear-eyed confidence and skill, these poems offer hard-earned insight into the human dilemma.”

—Linda K. Sienkiewicz, poet and author of In the Context of Love

“In the first poem of this stunning collection, Detroit poet John Jeffire, speaking of the day of his own birth, says, “I sprung dumb from the viaduct gutter…/ Backed up with rainbows of transmission fluid.” These lines by Jeffire shovel coal, they kiss, they prostitute. They are a fifth of Black Label saved for a special occasion. These lines are rap, they are blues, they are tribute. Seriously, I’ve read nothing as honest as these poems. They come from a poet deeply in love with the mess that is this life, and the woman that is his wife. If all writing is guided by love, these poems are revolutionary; they riot against ignorance and protest on behalf of truth. They are earthquakes whose first rumbles are desire. We are thrown about by things as they are; the slow sweetness of wife-love to an ice-filled steel trough to piss in during a night of heavy drinking. No, these are not debauchery – these are humanity – and perhaps the most comprehensive book on humanity I’ve read since Tolstoy. Jeffire's poems are painted in the guts, gore, and tender images of everyday life. Yet they remind us that there are “Saints on strike in / A discarded century.” The work here is both the siren and the silence after. It is Rock & Roll and the ringing buzz we carry home. I don’t want to leave the concert of these poems.”

"John Jeffire's poems are challengingly and delightfully loaded with unrelenting voices and realities."